Did you know? - Today's U.S. coins, dimes, quarters and half dollars have a solid copper core and an outer layer of a copper-nickel alloy.

To understand the true definition of “The American Dream”, one doesn’t have to look further then the origins of Safran Metals. Founded in 1939 by Paul Safran, an immigrant from Nazi Germany, the company has become a Chicago institution. 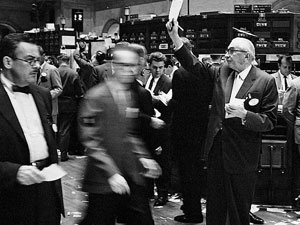 Before fleeing for a better life with little other then the clothes on his back and a limited understanding of the English language, Paul had acquired a knowledge of metal through various apprenticeships and jobs, even starting a metal company in Germany before the Nazi rise to power. Forced to leave his homeland and make a fresh start in the United States, Paul decided to create Safran Metals when he realized that it may be easier to actually start a new company than finding employment in another. With the help of his wife Adda, Paul started Safran Metals in his small two-bedroom apartment, eventually growing the company into the industry leader that it is today.

Safran Metals has always been a family affair, valuing tradition, history, and trust, and standing as a testament that the American Dream is more than a possibility, it is a reality.

At Safran Metals, we believe that our employees are family, and in some cases, this is especially true. At its inception, Safran Metals began with Paul Safran and his wife Adda operating out of their two-bedroom apartment. While Paul went out to find new business, Adda became the company’s first bookkeeper, and the two eventually purchased a 4,000 square foot facility to accommodate the ever-increasing size. The business continued to grow over the next two decades and in 1967, Paul’s son Steve joined the firm and under his leadership Safran Metals relocated again to another larger facility.

In 1999, Steve’s son Todd began interning with the company, joining full time in 2005 and ensuring three generations of family ownership and operation.

Safran Metals has always been a family affair, valuing tradition, history, and trust, and standing as a testament that the American Dream is more than a possibility, it is a reality.